Posted on December 08, 2017 by Premier Automation 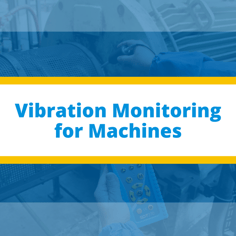 Vibrations, what may seem like so irrelevant and benign are actually quite serious, and possess the tendency to damage a machine’s sensitive components. When dealing with industrial machines, shaking is something for which all damping efforts are made beyond a known threshold. The major task is to determine whether the magnitude of oscillation being faced can be tolerated or if needs to be stopped.

Vibration monitoring is carried out to record & monitor all parameters that correspond with movements of a machine including oscillations, inclination angles, rotational angles, etc. Vibration sensors that make use of the CANopen safety interface along with a switching relay are designed to monitor dynamic acceleration within the frequency range of 0.1 – 60Hz. Band filters can further be used to divide this into sub-areas. For instance, low frequencies less than 5Hz may be classified as bearable while others can be analyzed in greater detail.

The vibration sensor can be intensively parameterized using the CANopen safety interface, while specific procedures may be initiated to take into consideration the safe communication of these parameters. It is very vital that the safety-relevant parameters and functions are transported with transparency.

Parameterization allows CANopen object to write new values that allow the user to vary the parameters according to their needs. The checksums have to be transferred for each parameter and have to be calculated at the user’s end, in advance. Either a calculation tool may be used or the calculation may be carried out independently.

Vibration Testing at a Wind Turbine

A wind turbine’s job is essentially to generate electricity out of wind. This naturally involves continuous oscillations & vibrations. But the ins & outs aren’t that simple. The construction of a turbine is quite complex, and sensitive components in it have to be shielded away from severe vibrations at all times. The oscillations & vibrations that occur during generation are primarily native to the gondola and the mast. These variables are measured, and monitored at all times. If the vibrations are excessively high then the entire system is greatly affected. The accelerative forces that occur in the mast have the tendency to produce fractures that can bring the whole thing down in addition to causing damage to the internal transmission system. These vibrations lie within 10 – 50 Hz.

In retrospect, external influences also play a major role in adding to these vibrations. Factors such as rotor blade icing or imbalance can lead to constant vibrations in the entire system. Such frequencies lie within the range 0.2 – 3 Hz. These vibrations also have to be registered as the control system must shut the system down if the threshold is exceeded.

This is where the sensor is utilized as a safety component. The measured value of the vibration is continuously compared to the user defined threshold values. As soon as these values are exceeded, a signal is sent to the internal safety relays. Usually two relays are installed in series to make sure the system stays disconnected even during unfavorable conditions, if one of the relays fail.

The sensors are also used to monitor the vibration behavior over a long period of time to make sure that the cumulative amplitude doesn’t exceed a certain limit. If the value is exceeded over a short instant, then the relays aren’t operated but moderate & higher values illicit a safety response from the system. In addition, data collected over a long period of time is also analyzed to predict the effect of external factors on the intensity of the vibrations. This way the system can be prepared in advance before high intensity vibrations permanently damage components within the system.

Another great feature in vibration sensors is the ability to stop the system in response to a specific vibration sequence. This is carried out through a shut-off relay and identification of zero-axis crossing.

With the passage of time, the two switching contacts may get corroded and degraded. It is therefore important to know about their condition and reliability. It is possible to carry out a self-test using in-built functions so that the relays’ operational status may be checked. It is checked thoroughly whether the relays respond in time and take the specified time to close so that it damage may be minimized in the event of a major threshold violation.