Five Ways That Can Advance Robotics in Manufacturing

Posted on January 24, 2018 by Premier Automation

Despite the string of advancements in the field of automation, robotics remains a relatively young field, holding promises that would take years to mature on a large-scale. The success of robots however has sparked interest of several businesses, and many have started migrating towards this technology.

Manufacturing companies can greatly benefit from robotics as several tasks are being handled manually, whereas they can easily be delegated to a robot. American manufacturing is in hard need for such a technology so it can retain & bring back its lost market.

The question about job uncertainty still looms, but until a real-time situation presents itself, no one can truly put these fears to rest. It’s quite simple; if you don’t make way for automation, the competition will and eventually put you out of business altogether.

Implementing robotics in a manufacturing environment isn’t something that can be accomplished in one go. However, companies can start making ways for robotics to take over, thereby smoothening the entire process. Here are five ways that will help you boot-up robotics in your environment.

It is often stated that robots are flexible. This statement isn’t entirely true. Robots are machines that would do as they’re told to do, given the peripherals and machinery exists to support their operations. Making the most out of your robots can greatly bring down associated costs, and boost productivity. Instead of trying to tailor your process according to the robots, provide your robot improved software and modular solutions.

It takes time to integrate robots within a system. Deployment of robots within an existing system can take hours, making sure every single component is in place & sync. This isn’t the way to go.

Right from the very start, design robots that take minimal time for deployment. This would give you the ability to instantly respond to changing consumer requirements, and redeploy within a moment’s notice. 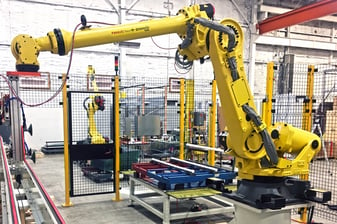 Collaborative robotics is a fresh concept that plans on bridging the divide between workers and machines, in a sense alleviating the risk of unemployment!

Currently, robots work in a largely isolated environment, surrounded by a number of warning signs. However, if we can bring robots into a manually operated environment, the results would be too fruitful. Warehouses have already started implementing this idea, the most solid one of which comes in the form of Amazon Kiva. The mobile robot works in factories & warehouses, assisting human operators with loading/unloading products.

The United States Defense Department along with other partner organizations has provided a $250 million grant to the ARM institute, in an effort to bring back manufacturing to the US. While the initiative is certainly commendable, more needs to be done at a wider scale to accelerate this process.

Small-time business owners aren’t really comfortable with something that requires too much inhouse effort. The barriers to deployment would need to be lowered, and help would have to come in the form of workforce training & educational investments.

The job market is changing; this is an undeniable fact. But its changing for the better. Workers would need to constantly upgrade their skills, according to the changing requirements instead of hoping to do the same job throughout their career. Robots wouldn’t hurt workers’ chances for employment, but would create exciting opportunities, which would be more creative & less repetitive in nature.