Posted on February 08, 2018 by Premier Automation 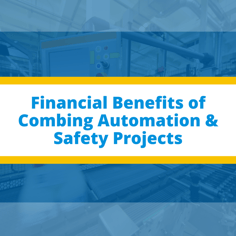 Dedicated departments for engineering, environment, health and safety can be found in almost every mid to large sized manufacturing company. These departments have little collective knowledge-pool and coherence, since traditionally their KPIs have very little overlapping. For instance, engineers continuously work with operations to improve productivity & efficiency of the equipment, while safety professionals analyze & reduce risks. Therefore, it’s very rare for the two departments to cross paths. However, this attitude has to change if an enterprise wants to keep itself at par with the competition and adjust according to the latest market trends.

As more advanced technologies enter the market, cross-functional collaboration is becoming extremely important for proper utilization of resources as well as survival within the competitive environment. The main challenge in such cross-functional collaboration is short-sightedness from the company’s decision-makers who don’t realize the amount of money they would save by introducing such processes.

Until recently, addition of physical guards to equipment has been the primary method for reducing injuries & risk. However, over the years, intelligent methods such as installation of safeguarding devices have allowed easier access to machines. These devices often work independently of the rest of the system, but if they were to be integrated within the company’s automation network, more long-term benefits can be reaped by both the engineering & safety departments.

A large food & beverage company served as a case study to understand the savings achieved through cross-department collaboration. Two project proposals requests were generated, six months apart, on the same pair of 15-year old depalletizers. The purpose of the first project was to enhance the safeguarding mechanism on the depalletizers as recent injuries had occurred due to lack of awareness of how the current mechanism worked. The scope of the second project was to upgrade the original control system with a new PLC & HMI.

If carried out as per the given timeline:

But what if the two projects were to be combined? If the scope & purpose of both the projects was to be kept the same, but they were combined, savings of up to $45,000 would be achieved. Some notable cost-cutting areas include:

Several short-term & long-term benefits are reaped through an integrated safety solution rather than two separate solutions such as reduced exposure to hazards, shortened downtimes, greater automation, etc. One major benefit that leads to huge financial cuts is the accomplishment of change orders through programming, instead of physical changes. Whenever a change request is forwarded to the engineering department, they seldom need to rip out the entire hardware; instead they can accomplish the change request through programming. This greatly saves monetary resources as well as the time required to cater the entire process once again.