Why Move Towards Industrial Robotics?

Posted on November 10, 2017 by Premier Automation 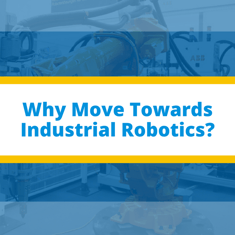 While robots do bring numerous benefits in terms of efficiency, safety and reliability for an industry, at the same time they tend to overwhelm workers with the notion that their jobs are going to be replaced. The reaction is quite common, especially in small to medium sized firms for whom automation is more of a necessity to stay competitive.

Take Vickers Engineering, a Michigan-based automotive for instance. The company is a contract manufacturer for various automobile giants like GM, Toyota, Honda, etc. In order to meet the dynamic needs of its customers, Vickers Engineering must come up with an automation strategy to ensure cost-effectiveness. When the idea was floated within the company, staff was very cautious as they were fearful of layouts. But proper planning beforehand by the company ensured that the company remained solid. Without losing a single staff member, Vickers managed to create new roles while replacing redundant jobs with robotics. Automation was not only necessary to bring down costs but to eliminate efficiency as well. After introducing industrial robotics, Vickers was able to bring down its bad parts ration by 4 per million, which is an impressive number given the complexity of the processes.

The effectiveness of industrial robots is dependent on the application for which it is being used. For a manufacturer who’s looking to save costs by bringing in offshore resources in use, industrial robotics can do wonders. Offshoring involves several costs of its own such as transportation and is at risk from factors such as delays and losses. On the other hand, robots can perform all the tasks which would otherwise be handled by cheap human labor. Robots are great at repetitive tasks, and rarely make any mistake, something that can’t be said about human labor. By following such a scheme, manufacturers can save precious time to market, costs as well as eliminate any risks associated with offshoring.

Industrial robots have faced great development as manufacturers have realized their uncountable benefits. Today, robots can be used in a plant to automate almost any kind of task. Some of the applications robots are good at include: 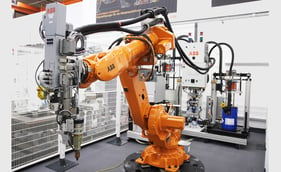 Industrial robots replace humans and perform tasks that are otherwise hazardous and exhausting. By doing so, they provide an opportunity for workers to focus on more creative issues that require complex thinking. This would ensure greater productivity in the workplace, with humans coming up with ideas and robots implementing them seamlessly.

Robots are utilized to do the “heavy-lifting”, and therefore hold significant amount of strength, enough to do fatal damage to humans. In order to instill safety for humans within robots, collaborative robots were introduced. These robots are often smaller in size but are designed to work in conjunction with humans, featuring sensor technology and greater learning capabilities.

Collaborative Robots have the added benefit of being smart which allows engineers to quickly program them according to their needs instead of spending dozens of hours, which is the case with regular robots.

While these robots have a higher price tag, they prove invaluable in complex environments where human-robot interaction is required frequently to get the job done.