How Robots are Changing Heavy Fabrication

Posted on October 30, 2017 by Premier Automation 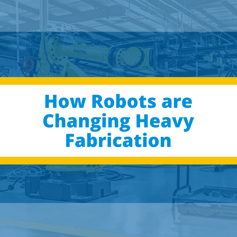 A technological evolution is underway in the Heavy Fabrication industry, particularly those that involve large-part & large-plat foundry applications. Conventionally, the industry has relied heavily on human labor, hoists and cranes to get the job done, but the downward trend in the cost of robots has allowed these industries to look towards robotic automation.

Large-part manufactures such as those that make frames, castings, off-road vehicles, etc. are limited in their ability to transport these parts quickly and safely. Parts can weight up to a whopping 1000 pounds and can be as long as 12 feet making the entire process extremely time consuming.  In order to improve throughput and lower processing time, large-part manufactures are turning to robots to handle all the heavy lifting.

Robots in the Foundry

Traditionally, system integrators have stayed away from the idea of using robots in foundries due to the high cost & risk involved. However, foundries that reaped the benefits of robotic automation are much more competitive than those that kept their manual systems running. Return on Investment may be a concern, but it doesn’t take long for the benefits to size up. As little as 6 months are required for ROI, which is nothing compared to the efficiency & safety such a system brings with itself.

Labor shortages are becoming a threat to foundries today, especially at spots which are too tough or unhygienic to work in. Robots can solve this problem by supplementing existing workforce, allowing them to move onto lighter tasks. The process of pouring molten metal for instance is extremely dangerous, and therefore ripe for a robot to take. 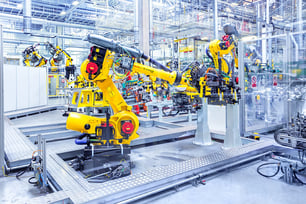 Furthermore, a manual laborer is more likely to introduce error into processes such as transferring molten metal to a die compared to a robot which would work as programmed, every single time. Humans are far from perfect, and inconsistent operations can result in loss of revenue, especially if the problem is recurring. A robot works identically and spends comparatively less time adjusting itself, allowing manufacturers to predict order completion beforehand.

Fabrication of Large Plates with Robots

Cutting thick metal plates has become a lot easier ever since high-powered fiber laser have been introduced. As a result of this, large-plate fabricators are finding it extremely difficult to keep up with demands such as floor grating, structured steel, mounting brackets, etc. This is another thing that is ripe for robotic technology to take over.

In order to fabricate trapezoid-shaped tubes from flat laser-cut plates, one of the biggest challenges faced is presenting material of such size to the press brake. The operators have to go through a complex, time-taking process to get this task done, which is not acceptable given the huge volume of orders (400 tubes per day).

A robotic system can solve this problem, and at the same time double the throughput. A human worker may have the ability to move the plates quickly over short intervals, but would ultimately require some rest before he moves ahead. Large-plate fabricators on the other hand require no breaks and can work at a consistent rate. In addition, they bring the added factor of safety and reduce associated health costs that come from repeated lifting & twisting. As a result, the company can achieve ROI in a much shorter time period, and can instill permanent benefits for the company to reap.

Today’s robots are embedded with offline programming features. This removes most of the manual steps required to setup & configure the robot. The entire heavy fabrication process can be taken care of in a virtual environment, while operators don’t need to touch a single piece of metal. Offline programming minimizes downtime, and makes it available for work in just a few hours. At the end of the day, the entire industry would benefit, from the workers to the clients, and a safer and more productive workspace would be created as a result.