What You Should Know About Cascade Control 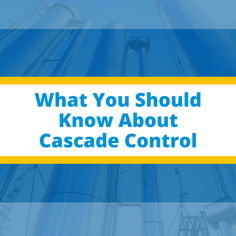 Multiple sensors are often used for measuring parameters in controlled processes. In such cases, cascade control systems offer a much more viable and better choice than traditional single-measurement controllers. For instance, a temperature sensor that measures and alters the valve actuator in a steam-fed water heater may seem like a complete solution, but it would start to bottle-neck once multiple parameters start chipping in, such as mechanical friction.

A cascaded control can be understood by the flow diagram below:

If looked upon closely, it can be identified that the inner loop works like a traditional feedback control system with a set-point, a process variable and a controller, while the outer loop behaves in the same way, except for utilizing the inner loop as its actuator.

It must be understood that a cascaded control system cannot solve every single feedback control problem, but in the right conditions, it can prove very advantageous.

The following must be taken into account when trying to identify the right circumstances:

Everything may not always go according to plan. Cascade control has a few drawbacks as well, the most notable one of which is the additional cost incurred due to the extra sensor and the controller. Such systems are more complex than single-measurement ones, and require twice as much tuning. In addition, if the inner loop is too aggressive and the two processes compete with each other closely, then this may bring instability to the closed-loop system. However, this is unlikely if the inner loop is faster than the outer one, inherently or through tuning.