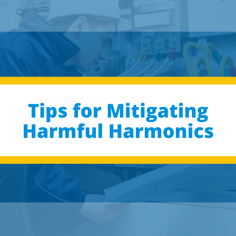 The widespread adoption of power electronics in the industrial sector did lead to astonishing energy savings, however at the same time it also increased the presence of a negative factor within the electric grid: Harmonics.

Harmonics are voltage & current waveforms that are sinusoids with frequencies that are some multiple of the base signal’s frequency. Normally, the world follows a pure sinusoid of either 50Hz or 60Hz. When a harmonic of 3rd order is introduced at a 60Hz power system, a component of frequency 180Hz is added to the system. This in effect, distorts the shape of the voltage & current signal that is fed to the appliance/component/machine. Example of non-linear loads include battery chargers, UPSs, VFDs, LED drivers, electronic ballasts, etc., most of which are usually found within commercial or industrial buildings.

Voltage distortion created by harmonics can cause wide ranging damage, covering the plant, equipment as well as the main power supply.

As a whole, harmonics lead to greater energy losses which translates directly into higher electricity bills.

Harmonics in current flow doesn’t stay isolated within the building/plant’s electrical network, but effect other electric loads connected to the power network. This means multiple customers can be negatively affected in terms of efficiency, reliability and safety.

Mitigating sinusoids as well as their harmful effect starts with aligning with international harmonic control requirements, i.e. IEEE-519. The standard focuses mostly on industrial customers, which are mostly responsible for such distortions, but the standards apply to the commercial side as well.

Also called a series solution, an input line reactor is simply an inductor connected in series with a rectifier. The solution is quite common due to the low cost and small size of the components involved. Line reactors are typically built within VFDs at the input side and usually come in impedance ranges of 1.5%, 3%, 5% and 7.5%.

In their own right, transformers are inductive load and can therefore reduce higher frequency currents from the line. Transformers can provide relatively inexpensive solution to reducing harmonics. This is especially true when a single transformer is serving several VFDs.

At much larger loads, e.g. over 50hp, 5th & 7th harmonics become common. A 12-pulse rectifier is therefore used to eliminate these distortions. By using 12 diodes instead of 6 and adding a phase shifting transformer at the front end, the 5th & 7th harmonics are cancelled. Still, the 11th & 13th harmonics prevail but at magnitudes that have little impact. The solution does have its disadvantage, mainly cost and the large physical size, which is required for the installation of a delta-delta and a delta-wye transformer.

This method utilizes two separate transformers to feed almost equal non-linear loads. As a result, the harmonics cancel each other out. The downside of this method once again is the extra cost and space required for the additional transformer, as well as the maintenance costs that come with having two separate units.

These filters are used in power systems where too many non-linear loads are affecting the power quality. A single filter upstream is used to filter out harmonics for several non-linear loads instead of having one for each individual one. These filters are installed to eliminate 5th, 7th and 11th harmonics. Capacitors are extensively used in making these filters, so in case the system is lightly loaded, the power factor tends to shift to the leading side.

A network of rectifier diodes is usually found in a regular VSD, however the AFE solution eliminates these and replaces them with an insulated-gate bipolar transistor (IGBT) controller rectifier.

This solution is one of the best when it comes to lowering the Total Harmonic Distortion, and thus maintaining the overall power factor from large motor loads (50hp). But using an AFE based solution does have its downside which comes in the form of a distorted voltage waveform due to lower switching frequencies. This can malfunction sensitive equipment such as PLCs and those involving telemetry. The amount of heat being produced by the system also increases as now the AFE would also be producing it, in addition to the VSD.