The Thin Line Between Robotics and Artificial Intelligence

Posted on November 07, 2018 by Premier Automation 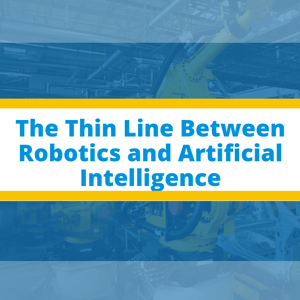 With the massive inflow of information into our lives, and the speed with which technology is advancing, we sometimes tend to blur the lines between fundamental concepts. Robotics and Artificial intelligence are two concepts that are often mixed, and thought of as being part of each other, while in reality they serve different purposes.

Are Robotics and AI the same?

The following Venn diagram shows how robotics and AI are different, yet linked with each other: 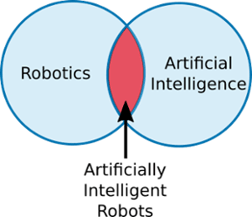 Stated simply, robotics is a branch of technology which deals with programmable machines that are able to carry out tasks, autonomously or semi-autonomously depending on their feature-set. There are three vital parts of a robot:

Coming over to AI, it is a branch of computer science that deals with coming up with algorithms or computer programs that can mimic human intelligence to solve a problem. AI algorithms are quite common, and a firsthand account to them would be the Google Search Engine.

These form the bridge between the two terms. Robots that are programmed with AI constitute this group. Most robots used in industries aren’t intelligent but instead rely on a sequential script to get the job done. However, if machine learning is incorporated into robots, they can analyze the data they collect and perform operations accordingly. For instance, a robot would be powered by AI, if it could pick up an item, determine its type and notify if any irregularities are present in it. This involves machine learning as the robot would have to “learn” that the item it has picked is different from the usual workload. In retrospect, a robot that simply picks up an item and places it somewhere would not be “intelligent” as it would simply repeat a set of instructions, without questioning them.