The Benefits of Machine Learning for Industrial and Collaborative Robots

Posted on October 18, 2018 by Premier Automation 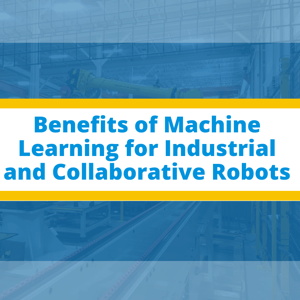 Advancing the capabilities of collaborative and industrial robots to make them smarter is something carried out through Machine Learning. Without an array of sensors or neural network systems, robots would be dull and blind to say the least. Their restriction to performing one task at a time would severely limit their productivity potential. This is where vision sensors and machine learning comes in, allowing robots to achieve much more than they could independently.

UC Berkley and Siemens presents a wonderful application of machine learning in the field of robotics with the DexNet 2.0 system developed last year. The robotics system’s purpose was to pick up parts, which may sound simple, but requires sophisticated programming and practice.

The DexNet 2.0 system leverages a 3D sensor and deep-learning neural network which deciphers the shape & appearance of the object. The system has an impressive accuracy of 98% while it is 50% confident that it could grab on a new object. If an instance would arise where it would be less than 50% confident it would perform visual inspection, grabbing the part with 99% accuracy!

Types of Machine Learning in Robotics

There are several types of machine learning in the world of industrial and collaborative robotics. The example above, i.e. DexNet is an advanced robotic vision system, consisting of complex optical equipment allowing the robot to “see”. A fascinating type of machine learning developed recently is imitation learning. In this case, someone would show the robot as to how an object is picked up, typically by grabbing the robotic arm a few times and repeating the action. The robot would then learn based on these movements and replicate them on its own.

Other types of machine learning in robotics include self-supervised or multi-agent learning, which are still under development, leaving imitating learning and computer vision as the two prime methods.

As time progresses, further developments will take place in the discipline which would ultimately lead to tighter integration with the industrial world, with machine learning probably becoming a fixture in all robotic systems one day.