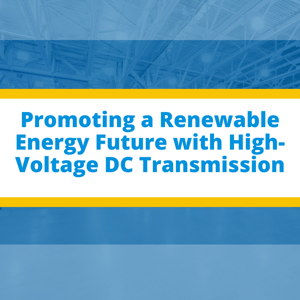 Renewable energy is by far the best way to limit dependency on fossil-fuels, and stop the deteriorating situation of the environment, globally. However, the current power system is a stark reminder of legacy technologies, not to mention highly dependent on age-old principles and techniques, putting up hurdles for the integration of renewable energy plants.

In addition, transmission and distribution networks often face project delays, due to reasons such as right-of-way, resistance from activist groups, and limited financing options.

Conventionally speaking, the world operates on AC power. From the very introduction of electrical power systems to the world, AC has been adopted as the preferred mode of generation, transmission and distribution. The reasons to it overpowering DC power was simple: lower losses. The transformer played a vital role in solidification of AC’s role as the preferred mode of electricity, allowing long-distance transmission to take place with minimal losses. This wasn’t an option for DC power, which at the time, could only be transmitted at the voltage level at which it was generated. Today however, the situation has changed.

High-voltage direct current transmission systems have come into existence due to the advancement in electrical technologies. While the concept is still fresh and thus expensive to build for now, it can lead to the development of a more cost-effective system compared to AC systems that are already in use. The most major hurdle in the face of HVDC systems is the upfront cost involved, but this is something that ceases to be an issue within large projects, as three times more power can be transferred over DC rather than AC.

HVDC systems aren’t just a cost-effective alternative to conventional transmission systems, but are a necessity wherever distant alternate power sources such as wind and solar are thrown into the mix. It’s the green energy industry’s best bet for expediting the deployment of cheap, clean power for everyday use, and thus requires the urgent attention of government regulators.

The US Department of Energy states that the electric grid currently delivers around 3,857 terawatts-hours of electrical energy to 159 million customers. The demand would increase by 0.4% from 2016 to 2050, and would therefore require steady investment in new transmission and distribution infrastructure.

The availability and accessibility of alternate energy sources would slowly but surely give commodities such as coal and gas tough competition. However, issues regarding transmission and distribution remain persistent, posing a challenge to expediting a network that is renewable at its core.

The most common issue of right-of-way can be tackled through laying of insulated underground or underwater cables. It must be noted that DC transmission isn’t subjected to the number of losses that are otherwise commonly faced by AC transmission systems, such as proximity loss, Eddy current, corona discharge, etc. In addition, HVDC can transmit up to three times as much power through the same size, as the equivalent AC circuit, or alternatively, the same amount of power can be run down a much narrower right-of-way.

As far as the financial aspect goes, utility investments are typically managed by government regulators, who would have to step-up and take initiative for the successful implementation of HVDC lines. Cost-based and incentive-based policies would have to be introduced to encourage investment in this sector, setting off a chain-reaction, as individuals start realizing the benefits and savings over the conventional system.

While coal and gas power plants are often built on hand-picked locations, this isn’t an option for renewable energy plants, like wind, solar, geothermal, or hydel. Specific energy corridors have to be located in order to make the most out of the investment, resulting in high costs with respect to transmission.

And HVDC isn’t something that’s waiting to be hatched. It’s already in production. For instance, General Electric has installed HVDC links in Germany, connecting remote wind farms in the southwestern region of North Sea to the central grid. Similarly, it has developed a 10-gigawatt HVDC project that transmits over 2/3rd of the energy produced from a remote hydroelectric dam in the Amazon basin.

It can be safely concluded that electricity networks are changing rapidly, both at the generation and distribution end. The traditional approach of large and discrete power source tied to rigid grids is no longer productive, economically or environmentally. HVDC is a highly versatile and economic solution that will not only support profitability for power companies, but also speed-up the process of achieving a renewable energy future, bringing cleaner, affordable and reliable power to all.