Posted on January 14, 2019 by Premier Automation 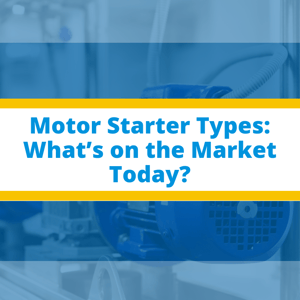 Inrush currents can surge up to eight times the nominal current within a motor when it is started through direction line. Such surges can be extremely hazardous for the entire distribution network and can cause voltage dips as well as mechanical damage to the motor itself. It is for these reasons that utilities and government regulatory bodies have started to raise the requirements for three-phase induction motors. For instance, after the initial IEC 60034-30:2008 regulation, the Amendment 04/2014 was released that dealt with energy consumption, efficiency and classes of three phase induction motors.

Similarly, as renewable energy gains a greater proportion of the generation mix, instability within power grids has significantly increased. This has been the main reason as to why distribution companies have added strict guidelines, especially for motors that have voltage ratings greater than 1 kV.

VFDs have gained considerable popularity in recent years as the preferred motor control mechanism. While these are typically used for speed control, they can be used in conjunction with small motors for starter purposes. VFDs provide several benefits such as reduced starting current, easy interfacing and linkage with a central HMI/SCADA system. These benefits come at a high price though as well as increased complexity during installation.

In order to avoid damage to motors, the distribution grid and penalties, plant operators can adopt specific starting/stopping techniques. The use of Frequency Converters is one of these, that provide a flexible way to control motors, whilst being expensive. Several companies use these for their drives as they can limit the starting torque while providing precise speed control functionalities. This can lead to greater mechanical efficiency and lower strain on the electric network.

The downside of frequency converters is their cost which piles up given the need for a control system. Also, an isolated storage space is required along with cooling and ventilation, which can add up to the electric costs.

A much more economical method for starting motors is the Soft Starter. The emergence of semiconductor technology has allowed this device to perform at high efficiency without requiring much maintenance, all the while being available at low initial cost. These are similar to VFDs when it comes to speed control but are specifically designed to smoothly ramp up the motor’s speed, thus eliminating the possibility for large inrush currents. It must be noted that they aren’t suitable for speed control, and are well-suited for on/off applications such as compressors, conveyor belts, etc.

These are extremely simple in design as well as functionality, operating simply by connecting/disconnecting the motor with the power supply. Across-the-line starters are generally used in commercial buildings that house motors of 15hp size. Their simple design means they don’t possess any capability to provide feedback to the building-level control systems. This sparks the need for supplementary devices such as CT, PT, etc. for monitoring their parameters.

The following diagram illustrates the design of an Across-the-line starter: 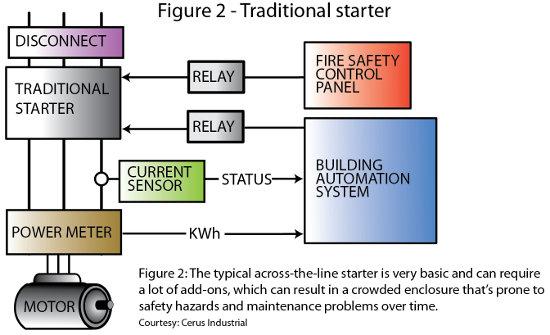 By taking into account the strength and weaknesses of the available starter types, a new type of starter was developed, namely "Smart Starter”. This is basically a fusion of across-the-line starters with electronic components, minus the complexity during installation and maintenance.

Smart Starters are designed to be used with motors that run at a single speed, while being studded with features such as built-in communications, power-metering and advanced motor protection. As a whole, these smart starters can reduce installation costs while providing functionality similar to those of electronic starters.