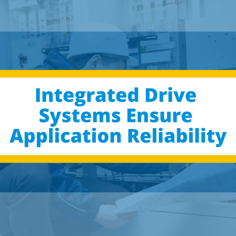 Because of their many benefits, Variable Frequency Drives, or VFDs, are swiftly surfacing in large industrial systems with complex motor systems requirements. The benefits of VFDs include higher system efficiency, operation flexibility, and improved reliability. The key to success behind this adoption of VFDs is developing clear-cut, well-defined requirements for running drives and motors. Having requirements in such a form allows components to be designed in an optimum manner, resulting in highest reliability and lowest cost of ownership.

The first step towards having a motor system with efficient control is understanding load requirements. Simply stated, the VFD must be able to provide rated current to the motor so that the motor can produce the necessary amount of torque for the load attached. As the rpm increases the horsepower increases as well, while keeping machine torque independent of the motor speed.

AC drive applications can be divided into two main types:

There are several applications that require reduced torque when driven at speeds lower than the base speed for that load. VFDs offer the greatest amount of energy savings as horsepower of the motor varies with the cube of speed, while the torque varies with the square of the speed. For instance, if the motor speed gets reduced by 20% then the horsepower is reduced by a cubic relationship (51%). These applications are classified as variable torque loads. Examples of such loads include centrifugal pumps, low viscosity mixers, and certain types of fans and blowers.

For these loads, the torque loading isn’t a function of speed. The load torque is unaffected by a change in speed, whereas only the horsepower varies linearly. Constant torque loads draw relatively high amount of currents when being run a low speed compared to variable torque loads. Examples of such loads include conveyors, positive displacement pumps, reciprocating compressors, and hoists.

Single-speed starting methods are used to abruptly start motors, subjecting them to high torque and inrush currents that are up to 10 times of the full-load current. This results in increased need for maintenance with the passage of time and reduced equipment life. VFDs on the other hand slowly ramp up the motor to operating speeds so that the electrical and mechanical stress can be reduced.

One may argue for the use of Soft Starters or Reduced-Voltage Soft Starters instead of Single-Speed Starting Methods to dodge the high torque and inrush current. However, the programmable capability of VFDs gives them more control over the entire process. The drives can even be programmed to run in specialized patterns to further reduce any electrical or mechanical stress. For instance, in the case of conveyor applications, an S-curve pattern can be applied for smoother acceleration and deceleration. The use of such tactics lowers the equipment’s chances of failure and thus, helps increase the operational efficiency and reliability.

The level of reliability instilled in a motor system through a VFD is unparalleled, irrespective of the AC motor control method being used.

VFDs can be programmed to:

These control parameters give the application a huge edge over conventional systems, as well as ensures a high degree of reliability during operation.

VFDs possess PID capability for fan and pump applications that allow the drives to hold the setpoint based on actual feedback instead of relying on estimations. Physical parameters such as pressure, flow rate, and level are detected through a sensor, and monitored through a PLC. The PLC is then used to send feedback signals to the VFDs. The drive then automatically adjusts itself to sustain the speed, rate, torque, and position.

With the heavy cost of running and maintaining drives and motors, VFDs are becoming more and more common because of the numerous benefits they hold. From reducing electrical and mechanical stress, to the programmable control, to increased reliability, VFDS have proven superior to Soft Starters for controlling drives and motors and keeping them running steadily. Leading to longer lasting drives and lower running costs for the company.

Premier Automation’s modern, innovative Drive Solutions will bring your equipment up to date with the latest drive technology. We work with your preferred drive manufacturer to engineer and build a comprehensive solution custom tailored to your unique manufacturing challenges.