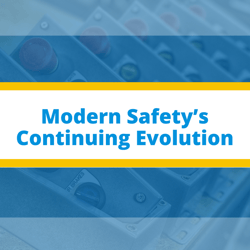 For decades machine safety systems in industrial complexes have been associated with individual components such as safety interlocks, electromechanical relays, switches, fencing, enclosures, and so on. But with each passing year, this approach seems to be expiring and lagging with the requirements of today.

Machine safety components are tools that can be used in a certain manner to ensure the safety of a machine. The end-goal of machine safety component usage has shifted from installation of safety components to the successful accomplishment of a goal-set and a strategy. This effectively means that a shift needs to occur from the traditional on/off, go/no/no-go paradigm towards a more functional approach that ensures the workability of all safety-related components in a coherent manner. This system-based approach is now the consensus of several safety experts due to the rapidly changing market demands and evolving technologies.

Higher speeds, greater customization, and reduced downtimes are key market demands that are changing the automation sector. Innovations in digital technology can enable the transformation towards a functional safety approach and allow manufacturers to respond better to market demands without compromising their plant’s reliability.

In light of these developments, the concept and practice of zoning is taking off. Zoning is the ability to safely control the speeds, motion, and torques of machines that fall within a targeted or zoned environment without interfering with the entire line. Consequently, this allows systems to be modified without bringing the machinery to a standstill, and while maintaining the safety of the machines and the people involved.

The Occupational Safety and Health Administration is the prime authority responsible for the implementation of safety regulations on US businesses. These regulations are often thought of as being too broad and generalized, making it difficult for manufacturers to navigate through the complexities of advanced safety and control technology. Of more importance in the US are standards that have been adopted with the consensus of organizations such as the Robotic Industries Association, the Organization for Standardization, and the American National Standards Institute. These standards go into great detail about safety requirements and make it easier for manufacturers to implement those requirements in their true essence.

Common standards used by manufacturers and industries include:

Regardless of whether the equipment works in compliance with the EN IEC 62061 or the EN ISO 13849-1, the calculations involving probability are required in order to verify the reliability of the safety-related parts of the machine controls. The most important section of these calculations is “risk assessment calculations or analysis”.

Risk assessment calculations and analysis is a standardized procedure that determines the level of risk presented by a machine and its components. This is followed by a risk reduction phase so that the majority of these risks may be eliminated.

It must also be noted that the validation team should be independent of the design team. The validation team should initiate their processes as soon as a module or phase of the system is complete. This way, the system can eliminate potential problems at the earliest, without putting in unnecessary dips in profits. The documentation provided for validation can prove invaluable for the design team to dodge such bullets early on.

Safety components such as enclosures, fencing, relays, sensors, and so on do not provide a substitute for a safety strategy, but can still be invaluable as a secondary line of defense. Safety devices have equally benefited from advancements in digital technology, and are more intelligent than they were before.

But this doesn’t mean whipping out the latest generation of a particular safety component, simply because it would be the most “intelligent”. There’s no doubt about the advancement in the features of safety components; however, this also has added greater complexity to their installation and maintenance, which adds a number of question marks on the improvement they are bound to bring in.

Among the classes of safety equipment effectively bringing new features and revamped protection are optoelectronic devices such as laser scanners. Unlike photoelectric sensors which often work in a line of space, these devices can monitor a wide area, usually in two and three dimensions. In addition, they are programmable, making it easier for engineers to implement zoning.

Safety laser scanners aren’t getting phased out though. Instead, they’re getting smaller and smarter. Features are being added to them such as remote diagnostics and troubleshooting through networked links.

The rapid maturing of wireless technology is also opening up new avenues. Electrical and instrumentation engineers can access their asset maintenance application from anywhere in the world, and manage sensors and devices placed at the remotest of locations. When coupled with a private or public internet-based gateway, wireless devices can multiply possibilities and replace localized manpower with a more central approach.

Profits are what drive industries. Sometimes people who work for organizations are so much concerned with the productivity of their machines that they often disregard the use of safer technologies. This behavior leads to disregard for other policies as well, which ultimately trickles down into production as well. The Aberdeen Group found that companies that prioritized their safety concerns in three areas, Culture, Compliance, and Capital, achieved 5-7 percent greater operational effectiveness, 2-4 percent lesser unscheduled downtime, and less than half the injuries compared to those that showed disregards for these three parameters (the three Cs).

Today, best in class manufacturers realize that employee behavior, processes, and procedures must go hand in hand when analyzing and remedying safety problems. Only then can productivity be improved, greater efficiencies by achieved, and of course, injury rates be lowered.

To learn more, go to our website www.premierautomation.com or talk to one of our specialists today.