Industry 5.0: What Does the Future Hold?

Posted on January 17, 2019 by Premier Automation 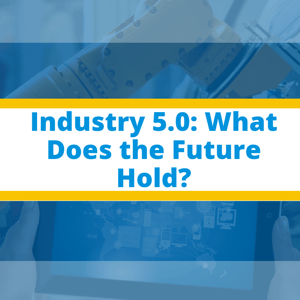 he idea of Industry 5.0 may be premature to many since we haven’t even seen Industry 4.0 implementations in their true sense. Nevertheless, it's closer than one might think.

As a setpoint, Industry 4.0 is defined as the use of technologies such as Artificial Intelligence (AI), Machine Learning, Big Data, connectivity, and so on to bring intelligence and automation to manufacturing. This might be the extent of what might think future industrial systems may look like. However, there’s always room for improvement.

The fifth industrial revolution, or Industry 5.0, would revolve around interactions between man and machine, which would be made possible through the introduction of cognitive computing. The skill level of workers and operators would be challenged, leaving them with providing value-added functions to production processes.

The need for such interactions is fueled by the increased demand of customized goods, without increasing the production costs. Industrial Robots will surely have a huge role in this, especially innovations such as collaborative robots (cobots), which are already well alive. By effectively automating an entire production process, humans would have the ability to innovate without worrying about the constraints that go with production.

A major difference between industry 4.0 and 5.0 would be the source of intelligence. In Industry 4.0, robotic intelligence takes the center stage, but with 5.0, human intelligence would circumvent this. While all this is still quite far away and blurry—to say the least—it is very well on the horizon. In a nutshell, Industry 5.0 will completely shift mechanical tasks to robots, while leaving creative side to the humans.