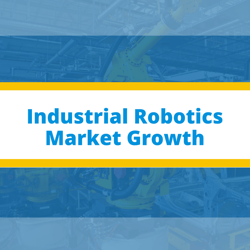 Automotive manufacturers take the lion’s share of industrial robots in the world, but as robots get cheaper and smarter, Loup Ventures predicts electronics manufacturing would also have similar demand numbers. This year, industrial robots’ market value could increase by 13 percent to approximately $14 billion. By 2025, this number could inflate to $33.8 billion, almost tripling the demand, thus making way for operations to get more efficient and reliable across the industrial spectrum.

With the cheaper price tag and the string of benefits they possess, collaborative robots may open the doors to new innovations and technologies in manufacturing plants and workspaces. And with the predicted growth in robotics, especially collaborative robots, it’s certainly a field to invest in and pay attention to.

Premier Automation is a Robotics Value Provider for ABB Robotics and an Authorized System Integrator for Fanuc Robotics. They design and implement automatic robotics systems for industrial OEM and End User customers.