Posted on December 10, 2019 by Premier Automation 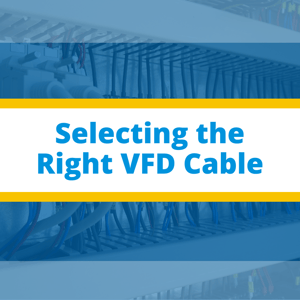 Variable Frequency Drives, or more commonly known as VFDs, are known for their unmatched speed-control within several industries. However, any machine that is subjected to the chopped DC square wave is also prone to a number of harmful effects. By making the right choice with cabling, these harmful components can be alleviated, and the connected machinery’s lifespan can be elongated.

For starters, VFDs are devices that convert alternating current to direct current by feeding the connected component, usually motors, a chopped DC signal. Next, through pulse-width-modulation, the drive tries to mimic a sine wave. By changing the frequency of this output, the motor’s speed can be controlled. The major problem that arises during operation is the amplitude of the output, which is 650VDC for 480V motors. The IGBT transistors within the drive generate reflective waves and electromagnetic issues that can affect electrical equipment connected to the grid.

Voltage overshoots are a result of the extremely fast rise time of the DC pulses that damage the system in the form of reflective waves at the cable-motor junction. The reflected voltage wave is dependent on two factors:

The magnitude of the reflected wave may be so large that it emulates the corona effect, ionizing the surrounding air, damaging the insulation and ultimately resulting in premature cable burnout.

One may think that picking cables with thicker insulation as prescribed by the National Electric Code standards would do the trick, but that is not always true. NEC prescribed cables are meant to be used in dry locations. For wet locations, designers need to use cross-linked polyethylene to counteract the heat generated by the corona voltage.

Instantaneous overcurrent faults can be triggered by higher frequency dc pulses in smaller VFDs with controlling motors rated at 5 hp or less. The high frequency pulses can charge the capacitance between the conductors, making the drive draw more current. To deal with this, cables with lower dielectric constant should be used, minimizing the instantaneous over-current trips. PVC and XLPE cables with thicker insulation are well-suited for such applications.

Under normal conditions, a three phase AC supply is balanced. Since VFDs use DC pulses to create three-phase voltages, there is a resultant imbalance, causing a neutral point voltage. This voltage is called the common-mode voltage source, resulting in the flow of current to the earth. This may form unintended ground loops through an electrical interconnection system. The downside of this is high levels of noise ranging from 60 – 30 Hz, which can cause capacitive coupling between the motor windings, frame and ground. Digital systems that are known to be sensitive to harmonics can get disrupted or damaged. Even a small offset in the voltage can lead to large amount of currents that can have a cascading effect on the system.

To mitigate this, first all grounding should be tied to the same potential at the drive. Unshielded cables within the metal conduit should be avoided at all costs, otherwise, the resultant EMI can cause ground loops.

The common mode currents can also flow to the shaft of the machinery being driven, all the way to the ground through the capacitance between the outer race and the bearings. As a result, electro-discharge machining may occur, damaging the bearings to a point where they may fail.

If conductive coupling between the equipment and rotor shaft is missing, then shaft-grounding rings can be utilized to give the rotor currents a path back to the motor frame. Standard cabling provides sufficient grounding to prevent mortal danger to workers, but can run short of shielding sensitive equipment against high-frequency harmonics. For this reason, several manufacturers such as ABB recommend that cables possess a symmetrical arrangement of three phase leads and earth conductors.

Electromagnetic induction or radiation from an external source can interfere with the workings of an electrical circuit. The effect can be as little as degradation of signals to complete loss of data within electronic devices. To tackle this, it is recommended that the shield of the VFD be grounded with 360 degrees contact at the enclosure entrance and the motor. Manufacturers encourage this technique and offer a grounding connector with 360 degrees contact for a safe passageway for the cables.

The result of 360 degrees shielding is essentially a Faraday cage, which is an enclosure that prevents electromagnetic radiations from effecting the contents within.