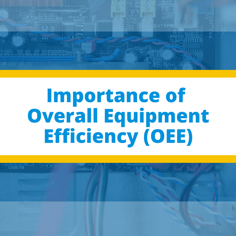 There are several important metrics manufacturing managers use to either gauge or improve their facilities’ efficiency or productivity. One of the most common is called Overall Equipment Efficiency, or OEE. Having an in-depth understanding of OEE and its importance can help managers achieve their efficiency targets in a timely fashion, without requiring frequent interventions.

OEE uses three different values to calculate the efficiency of a process: Availability rate, Performance rate, and Quality rate. Availability refers to how long a machine is able to be in use. Performance refers to the comparison between the machine’s operational speed and the speed it’s designed to output. Lastly, Quality refers to the percentage of parts the machine or process outputs that are quality versus the entirety of the parts produced. Combining the three rates gives the OEE of a process. The basic equation for determining the OEE of a process is:

For example, if a process’s Availability rate is 94%, its Performance rate is 85%, and its Quality rate is 79%, then equation would go as follows:

While 100% is the absolute ideal, it’s practically impossible to achieve that high an OEE because even the smallest decreases in percentage will heavily impact the result. Instead, many manufacturing managers aim for an OEE around 85%.

But how should an OEE rating be interpreted? Is it a benchmark metric that determines the worth of a company? Or is it an internal metric that has no weight outside of the facility? The best answer is that OEE should be interpreted as what it was meant to be: an improvement metric. OEE was designed to determine what the biggest losses are in a process. Once these have been determined, then a facility can determine how to best improve upon those areas.

There are six areas where loss in a facility is largest according to OEE. Each of them fall under one of the three ratings. These loss categories can be summed up as downtime, speed, and defects with two factors under each category, though there can be some overlap as to cause and effect between them.

The last two defect losses are process defects and reduced yield. Process defects are flawed parts, parts that need repaired, scrap, or anything produced that isn’t up to par with quality regulations. Reduced yield refers to a reduced amount of parts made from the start of the process to stable production.

There are several different ways a facility can track OEE, manually and automated. Manual tracking takes manual data collection through recording individual data reports and compiling them to determine a process’s OEE. Automated tracking involves using a software to compile data and calculate the OEE of a process. Automated is generally seen as the better alternative because it calculates OEE faster, allowing more calculations to be made across multiple criteria faster.

Tracking OEE allows facility managers to make the appropriate adjustments and improvements to counter the losses and optimize production. At the same time, facility managers should be careful not to use the OEE metrics and results to compare too harshly. OEE is specifically meant to show where improvements can be made, not how well a process is performing at different times. And as there are always limitations to accurately tracking the data, it’s important to not use OEE as an authoritative metric.

OEE is a powerful metric that can be incredibly helpful if used properly. Using it improperly can lead to confusion and frustration in a facility. Its purpose is to show where the best improvements can be made to a process in a facility, not as a benchmark or even a high-level KPI. Only using OEE in the proper manner can lead to improvements and a better production line in the end.

Engineering firms around the world are taking note of new strategies to improve OEE, and companies such as Premier Automation are on the cutting edge of efficiency in automation solutions. In fact, Premier takes a crucial role in integrating existing equipment with new capabilities including tracking abilities and accompanying software to map out changes. Reach out to us for a free consultation and our engineers can bring your automation system into the future.