IIoT & Robotics on the Plant Floor 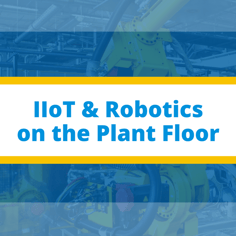 Data has always been there around us; it’s only a matter of harnessing it that makes all the difference. The Industrial Internet of Things is poised to revolutionize manufacturing by arming devices with data and connecting them to a centralized system. In theory, this would enable them to do anything from providing in-depth data, learning machine’s workings and optimizing operations.

Industrial robotics sit at the heart of almost every repetitive & tedious production process. While they may be autonomous, they may require interjections and are therefore usually connected, relaying measurements & recording about their performance to a centralized system. This is why they provide a perfect platform for deployment of Industrial IoT based initiatives.

Even though the buzz around IIoT is growing with every innovation in the world of automation, it still seems more fictional than real. Still, there are a few companies who are realizing the benefits of this revolution early, and trying to capitalize on them.

General Motors is one of these companies. In 2014, they brought Fanuc & Cisco onboard to create a zero downtime solution, which would connect a network of robots that are utilized for tasks such as dispensing, welding, etc. These robots would relay back information on their essentials, and go through maintenance before they break-down, eliminating any downtime between the processes. Through this project, GM has been able to onboard over 8500 robots per day, and avoid over 100 unscheduled downtimes. The downtimes did bring significant ROIs with them as one downtime costs around $20,000!

IIoT is highly ambitious & promising, and even though it's only being accepted by the largest & most-automated factories of the world, it would definitely play a huge role in boosting the efficiency, productivity & smartness of the workplace, as it would incorporate every single component, ranging from sensors to robotics to ERPs within an industrial environment.