How Can Arc Welding Benefit from Robotics? 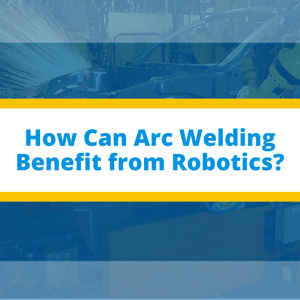 Welding is an age-old process through which two materials are fused by applying heat, intermixing and cooling, resulting in a strong joint. Traditionally, welding has been performed through arcs or other tools operated by humans. However, in recent years, robotics have been introduced to this field as well, which has opened new avenues and possibilities of productivity within the workplace.

Robotic welding holds several benefits over the traditional process, some of which are increased efficiency, consistency and higher Return on Investment. Breakthroughs within robotic welding technologies have given way to robotic weld cells which are much more productive and safe, dramatically reducing arc glare while improving the consistency of the end products.

Advantages of robotics within arc welding include:

Robotic welding systems can get the job done quicker since they don’t suffer from tiredness, obviously unlike humans. Whether you’re making use of a new or used welding robot, both would have greater consistency and can work without breaks, vacations or overtime salary!

Costs associated with manual welding can soar depending on the level of skilled labor and the job on hand. In addition, it is dangerous and therefore involves costs associated with medical care. With robotic welding, such risks can be eliminated entirely, and the costs vanish as well. The end result is greater productivity with lower costs.

Even the most skilled welders are likely to make mistakes, but robotic welders hold a certain degree of accuracy under which they won’t fall. This accuracy can be incorporated within the cost benefit analysis and thus can be used to devise the best welding strategy within the factory floor. Generally, the waste produced by robotic welders are less, thus contributing to lower costs.

From all the aforementioned benefits, it is clear that robotic arc welders have the capacity to ultimately provider Higher Return on Investment, especially during a time when labor, material and utility costs are on the rise.