Posted on February 19, 2021 by Premier Automation 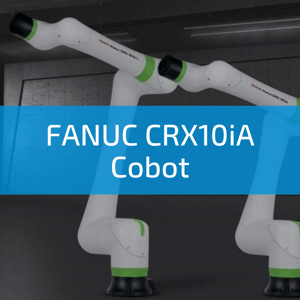 Adoption of robotic automation in both manufacturing and e-commerce has been on a steady rise over the past ten years, as robots can typically do many things more efficiently, more reliably, and consistently while saving operators from difficult, dangerous and demanding tasks. But there are many operations that still need the human element for directing the automation, loading materials and adapting to the ever-changing production environment. So it made sense for automation companies to come up with a way for humans and robots to work together.

The collaborative robot was born.

The collaborative robot — or cobot, for short —was designed to work alongside humans and combine the best of both worlds: the experience and touch of a human with the precision and control of a robot. But the world has shown time and time again the man and machine do not always work well with one another. So it’s important to look at the benefits and features a cobot will offer you, and equally important to conduct a proper risk assessment to ensure your workers are kept as safe as possible. It’s a delicate balance, and critical to the overall success of employing cobots to work alongside your operators.

Benefits and Features of the FANUC CRX Cobot

FANUC is one of the world’s top robot manufacturers and they’ve released a new line of cobots over the past year — the CRX. Let’s take a look at their new line of collaborative robots and see what they can do for you.

Unique Features of the CRX Cobot

First, it is important to note that the CRX is an industrial robot, made for demanding production environments. It uses the same reliable servo motors and components that are the basis for all of FANUC’s robot product line. The arm is rated IP67, meaning it’s dust-tight and liquid tight – an important feature, enabling it to work in harsh environments. In order to achieve the power and force limiting feature inherent to cobots, FANUC uses two torque sensors per axes. Better yet, the robot uses sealed for life bearings – thus ZERO maintenance is required for up to eight years!

The CRX was designed with space efficiency in mind and has a relatively small footprint compared to other cobot models. But don’t let its compact design fool you, the CRX packs a punch for a cobot of this size.

FANUC’s new CRX was also designed to be easy to install and simple to set up, needing just your typical 120 V power outlet. With its small size, lightweight construction, and simple electrical requirement, installation of the CRX is one of the easiest cobot installations that you’ll see. 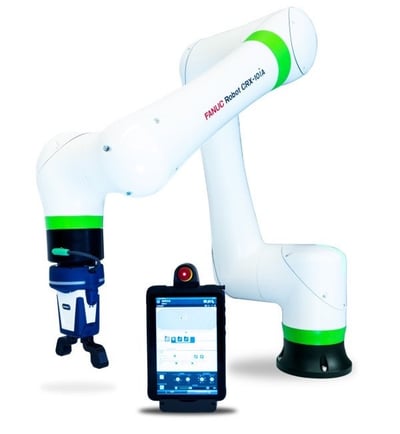 than traditional robots. Their new tablet teach pendant and icon-based programming is truly intuitive and simple to use. It comes with a large graphical display where you can see the virtual robot on the screen, along with data such as positions, registers, and safety zones. To generate a program, you can simply drag-and-drop icons for things like positions, gripper open/close, I/O and wait statements.

Manual guidance features allow an operator to simply move the robot arm to record positions or paths.   But the CRX has added features to make manual guidance even easier. The robot can be setup to move along a specific plane, or maintain tool orientation during manual guidance. This greatly assists the operator in making efficient programs, without the natural inaccuracies that could be inherent with free-form guidance. The CRX supports several different manual guidance modes to further improve the ease and efficiency of teaching programs.

The CRX can quickly and easily be equipped with different tools and grippers to suit your application. There’s a host of plug-and-play gripper modules available to make setup super-simple. In addition, if your robot needs to ‘see’ or ‘feel’, FANUC’s iRVision and Force Sensors also plug-and-play nicely. Basically, any of the software and hardware features that are available on the standard FANUC robots are available on their cobots. The list and options are endless, giving users even more flexibility to get the job done with the best toolset on the market.

As with any robots, but even more so with cobots, safety needs to be held in the highest regard. And the CRX won’t let you down on that front either. Here are some of the key safety features of the new CRX.

The CRX has safety rated speed limiting software built in, making sure that the robot does not go too fast to create too much force when it bumps into an operator. The CRX also contains dual channel safety rated sensors built into each joint, allowing the robot to 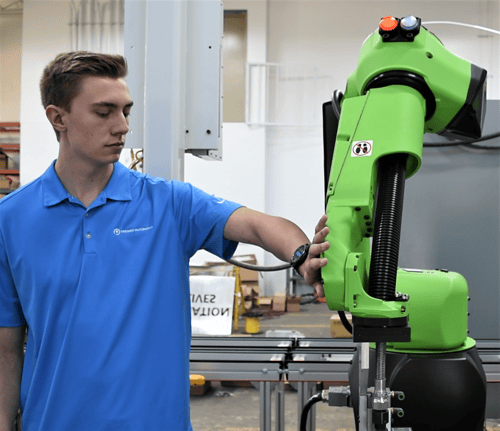 feel when it bumps into someone. When a human bumps into the CRX, the robot will stop in order to keep the operator safe. The CRX is very sensitive, so even the smallest bump will stop the robot to ensure safety.

In addition to the power and force limiting features built into the arm, the CRX controller has some standard goodies such as multiple safety inputs along with Dual Check Safety position check and safe I/O connect software options. These are useful for setting up safety zones or tying in peripheral safety devices.

One of the easiest ways to ensure as much safety as possible between man and machine is to remove any sharp edges that could cause injury. FANUC did exactly that with the new CRX, and you won’t find a single sharp edge or pinch points anywhere on the machine. So it’s super safe to grab, move, or stop with the touch of your hand at any time.

Ready for your first cobot?   One of the other features of the new CRX cobot line from FANUC is the free online tutorials available. These tutorials show everything you need to know about getting started with the CRX easily, from unboxing it, to installing, programming and running it.

All you’ll need to do is register on the FANUC America CRX site, and you can use their online portal to jump right in. With any new line of automation, including cobots: knowledge is power, and an invaluable asset.