Posted on October 30, 2020 by Premier Automation 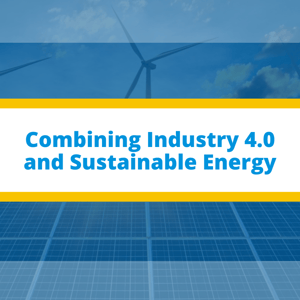 The advent of sustainable energy systems and introduction of digital transformation within the industry is substantially altering the way of life for people all across the globe. The way people consume, live, produce and trade are all being affected and changing, for the better.

Industry 4.0 as we all know aims to bridge the gap between the physical and digital world, leading to greater efficiency, transparency, automation and sustainability within processes. Much like Industry 4.0, transition to sustainable energy solutions has been on the rise in recent years with a high level of interest coming in from academia, industry and the general population. Both Industry 4.0 and sustainable energy share important characteristics and are highly influenced by technological advancements, dependent on the development of suitable infrastructure and on potential enablers for new business models.

Industries account for a major share of electricity consumption, with energy networks serving as the medium of transmission between generation and demand side. This link could be reason enough to think how transition towards sustainable energy systems and digital transformation of industries can benefit each other.

Digitalization of the Energy Sector

The energy sector has been active in the past few years and has taken significant steps towards digitalization. Advancements in the field of ICT, spread of internet and availability of mobile devices have opened new approaches towards solving the energy sector’s problems.

Digital technologies offer viable solutions to common challenges that prevent integration of renewable energy sources into small and large power grids. One major concept that has spurred based on digital advancement is “Smart Grids," which has received widespread attention in the past years. Several countries have developed dedicated taskforces for early implementation of this concept. The term “Smart Grids” refers to adding a digital layer on top of the existing electrical infrastructure, whether it belongs to the distribution, transmission or generation sector. This would allow electrical power systems to shift from conventional centralized models and give way to renewable energy, distributed generation and consumer-level visibility. The concept is relatively new and has several technical and regulatory barriers before it can be realized on a large scale.

Another major area of interest in this scenario is Virtual Power Plants (VPP), which are heterogenous coalitions of distributed energy resources composed of intermittent renewable sources, storage devices, conventional power plants and flexible loads. These power plants are highly dependent on technologies including Big Data, Cloud Computing and IoT due to the dynamic nature of the task. The main idea is to reduce dependence on centralized grid systems and make way for the harvesting of renewable energy resources. The concept is also under research and has the potential to end reliance on conventional non-renewable energy sources. Major industrial players have already gotten their hands dirty and are offering solutions for the development of Virtual Power Plants such as the Cloud-Based Energy Management System DEMS offered by Siemens’ Smart Grid Division.

Saving Energy in the Manufacturing Sector

One of the major aims of an Industry 4.0 implementation is to digitize manufacturing processes. Such implementations can offer significant energy savings, through optimization or replacement of specific technologies, introduction of software tools and elimination of energy-consuming hardware.

Let’s take the behavior of interconnected robots as an example. By minimizing the acceleration of robots, their energy consumption can be capped, reducing it several folds without increasing the production time. The use of collaborative tools would play a huge role in making this a reality. Optimization algorithms can be written, advanced sensors can be installed, and wireless medium of communication can be used to achieve this goal. In addition, the concept of Rapid Prototyping can be introduced to allow the production of products with low lot sizes at lower cost and in an energy-efficient manner. Rapid Prototyping is a combination of complementary technologies including CAD and 3D Printing to rapidly produce products that require greater customization.

In addition, entire business processes can be transformed to make them more customer-centric. For instance, on-demand customization of products could be offered to consumers which can greatly boost sales and become hugely popular among the clientele. Doing so would allow companies to save more resources instead of producing all-inclusive default solutions that would cost more, and sometimes not even be of the customer’s liking.

Sustainable Energy in the Manufacturing Sector

Sustainable Energy and Industry 4.0 is a rather new approach that hasn’t garnered much attention from researchers yet.  Nonetheless, the synergy of these two concepts offer much promise and potential. The presence of an active, reliable and robust data connection is the first and foremost step in forming this link, allowing the energy system to communicate with the plant floor.

Industries would have to make space of energy storage systems that can act as volatile energy systems, acting as a security for supply and grid flexibility. In addition, it can act as an effective cost-saving technique during peak-load hours. For industries that have high thermal capacities or steam-based processes, the concept of Power-to-Heat holds special relevance. It involves conversion of a surplus of electricity into thermal energy, either to drive existing processes or act as storage for during demanding hours. The concept can also be applied to housing units that make use of renewable energy systems, e.g. solar and wind. A similar approach that is being worked-on in Europe is “Power-to-Gas”, where the surplus renewable energy is used to produce gas (methane, hydrogen). These are then stored and converted into electricity when required. The Power-to-Gas concept is less efficient compared to Power-to-Heat but offers great storage capabilities.

All these approaches can be used to nurture Sustainable Energy within the manufacturing sector, powered by high-end technologies of Industry 4.0. Highly developed countries have already started working on frameworks for implementation of such ideas. The German Federal Ministry of Education and Research has launched projects that would carry out research on synchronization of industrial processes with renewable energy generation as well as on storage of energy in different forms.

The blend of Industry 4.0 and Sustainable Energy may still be in its early years but it is unavoidable as more technological breakthroughs make mass-digitization inevitable.