Automation in the Factory 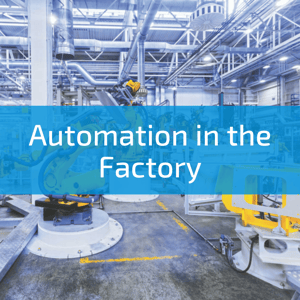 With the advancements of robotics and automation in recent years, entire manufacturing systems and processes can be automated these days. A manufacturing process that’s able to monitor itself and run efficiently is something that you would’ve only seen in science fiction movies just a short few years ago.

But that dream is now a reality, with robots today able to handle more complex tasks than ever before. No matter what people’s thoughts about automating the workforce are, it is the way of the future. Automation in the factory is going to happen, it’s just a matter of whether or not factories and companies take that in stride and use it to their advantage or not.

While we could go on for days about the advantages of automation in the factory and how it will help transform the world, let’s take a look at a few of the biggest benefits that it provides.

What Can Automation do for Your Factory?

Robots Can Take on More Than Ever Before

First and foremost, as robots and smart systems have gotten smarter in recent years, they’ve been able to accomplish more tasks and handle more complex activities than ever before. The increase in robot intelligence has made the idea of a fully-automated factory — which used to be a dream — into a reality.

A robot that can learn on the spot and change what it’s doing in real time. The sky's the limit for what robots can do for factories and the entire world’s workforce as a whole.

When automation and robots first became part of the workforce (which really wasn’t all that long ago in the grand scheme of things!), they were clunky, difficult to integrate into existing systems, and nigh impossible to connect to one another throughout the factory.

Over the years, computers have gotten smarter, smaller, and more powerful at all once. This has of course enabled robots to do more than ever as alluded to above. But it’s also done much more. It has enabled them to be integrated into the manufacturing process easier and be connected to each other, able to communicate. With the ability to sense, monitor, and record more than ever before and communicate with each other on a grand scale, the system and processes can detect issues better than ever and immediately adjust as needed to correct the issue. Automation is truly a marvelous advancement in manufacturing.

Collaborative Robots Can Work With People

One of the biggest advancements in the automated workforce in recent years came with the introduction of collaborative robots, or cobots for short. This innovative type of robot allows factory owners and companies to really decide which tasks they want automated and to which degree to automate them.

Designed to safely work alongside human workers, cobots enable factories to have the best of both worlds — the precision and reliability of a robot combined with the experience and human touch of the standard factory worker.

Humans working alongside robots is the true future of the automated factory, as there are some things that humans can do that just can’t be automated. At least not with the technology that we have today. Cobots can help bridge that gap and provide optimal performance.

Perhaps the biggest advantages of using robots and automation in your factory are the enhancements when it comes to efficiency, reliability, and safety. After all, what is more important in the factory than the perfect combination of these three factors?

Robots and automated manufacturing processes are inherently more efficient than a standard factory workforce due to their ability to work around the clock, providing consistent results. Which brings us the next big ticket item — reliability.

High-quality robots working in conjunction with a top-notch automation process can provide consistent, reliable results again and again. They don’t have the errors that come with a human workforce due to loss of focus, exhausting, or one of many other potential factors.

And perhaps most importantly, automation in the factory can actually increase safety although some people will try to argue against that. With more automation and robots performing much of the same jobs as a human workforce, there is far less risk of a human getting injured on the job since there are less in the factory. With the collaborative robots mentioned above, they are even designed to work with people and include tons of safety features.