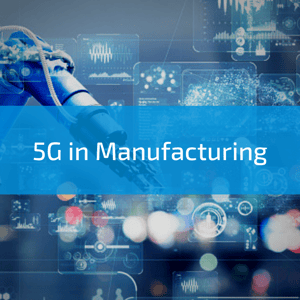 You may have heard of Industry 4.0 — the fourth Industrial Revolution — that’s been transforming the manufacturing world through the use of technology. Well with the introduction of 5G networks, Industry 4.0 is about to explode.

This new network has been gaining global popularity and acclaim in recent times, as it seems to be capable of changing the entire world of technology.

5G is often referred to as the fifth generation network and is the successor to the wildly popular 4G technology in use around the world today. Many people seem to think about 5G as just another network and haven’t really paid much attention to it.

But that’s not the case.

5G technology has the potential to change the world and just about every industry in it, and that’s not an exaggeration. For the first time, 5G networks will have speed and latency capabilities that rival that of entirely wired networks. Let that sink in for a moment.

That’s right, with 5G technology factories around the world might have the ability to go entirely wireless. Wired connections have long reigned supreme due to their enhanced reliability and speed. But 5G networks look like they’re soon going to be able to not only match the performance of wired networks, but even surpass them.

How 5G Will Transform the Manufacturing Industry

Now that you have an idea of what 5G is, here are some of the major ways that 5G technology will transform the manufacturing industry as we know it.

Automation in the Factory

Without a doubt the biggest reason that people are excited for 5G in manufacturing is the potential for much more automation in the factory. We’ll preface this by saying there will always be some aspects of the manufacturing industry and factories in general that will need a human touch.

But, an automated factory that can work 24 hours per day without getting distracted or needing a break would literally change the manufacturing industry immediately.

And 5G technology might just be the key to unlocking the true potential of automation in the factory.

One of the biggest limitations of the current automation systems that manufacturers are using is the reliance on wired connections. Sure, some things can be done wirelessly to a certain extent. But 4G networks and Wi-Fi can be too slow, too spotty, and too unreliable for some of the more critical tasks.

With 5G, those issues will go by the wayside. Within just a few years, 5G networks are expected to be upwards of 25 to 100 times faster than current 4G speeds, with some experts believing that speeds of up to 1,000 times faster are even possible. The coverage that 5G offers is also going to be far better than current networks, meaning that factories will be able to utilize more wireless capabilities without fear of failure.

Once factories start being able to break free from wired connections, the possibilities are literally endless — a wireless factory with a reliable network is something technology dreams are made of.

5G and the Internet of Things

On its own, the Internet of Things (IOT) has enabled the creation and proliferation of smart factories. The IOT simply refers to the various connected devices and systems all around the world which, when used within a factory, enables manufacturers to connect all of their various systems together through the internet.

But with the introduction of 5G and the capabilities that it has, the IOT is about to really take off — and for the better. As devices and systems within the factories are able to become more and more wireless, the ability to still stay connected to one another has long been an issue. With 5G and the IOT working in conjunction with one another, this will no longer be the case.

Consider 5G as the catalyst for the IOT, and it’s about to ramp way up.